Close Up: The Long Game 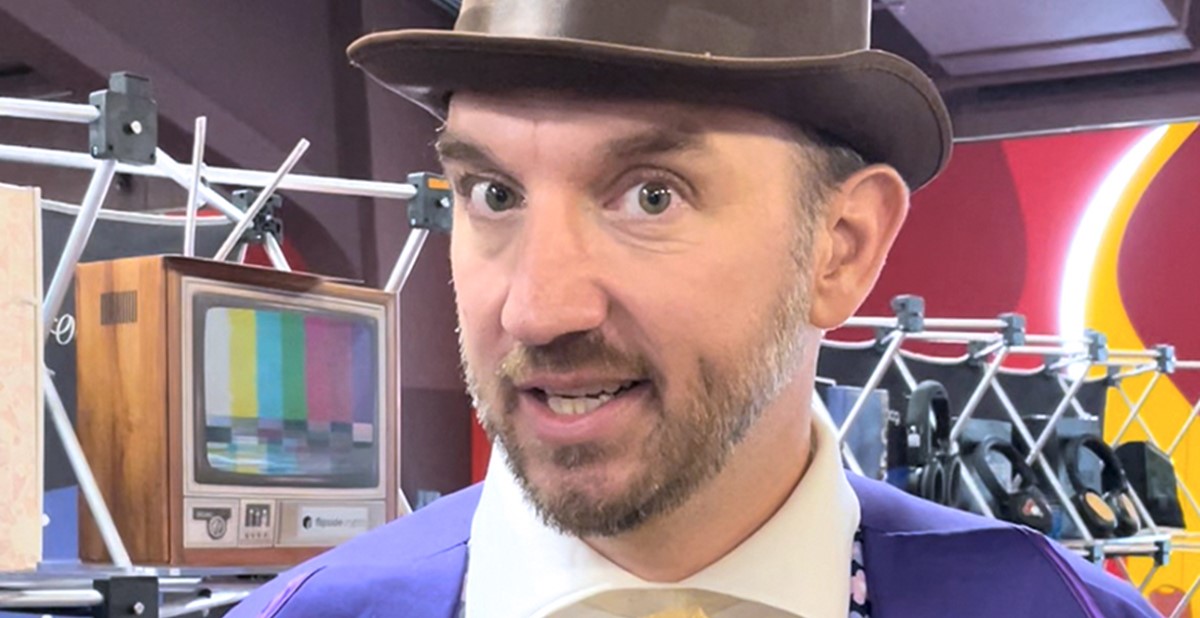 His TikTok page (@MondayswithNick) is devoted to the special day. Each Monday, Lateur posts a fun and silly video of himself either dressing up as a character or cracking a joke.

“I’ve always had a positive outlook on life,” Lateur says. “But I was at a point in my career, before I came to this industry, where I didn’t want to go to work. However, as soon as I got into this industry, the first event I did was a large trade show for a large distributor. I remember getting there on a Monday morning, being so excited. After that trade show, literally the next Monday morning, I was so excited to get up and do more.”

While some may detest a Monday morning, Lateur says this industry gave him the opposite effect. “Mondays with Nick was also helping me create a personal marketing campaign,” he says. “I was the only sales rep at the company when I first started. It was just me. How can someone remember me? I thought, ‘What do I like?’ Well, I like Mondays now, so every Monday let’s do something funny, dumb or weird. That’s how my social media page started.”

Lateur joined the industry seven years ago. “Like most people who end up in promo, I found it by accident,” Lateur says. “I’ve always been in sales or people-facing positions. I worked in a completely different industry, and one of the owners of that company also owned a promotional products business. One day, he called me and offered a job. I was like, ‘Selling pens?’”

After Lateur visited the factory and watched products being printed with logos, he decided to give the industry a chance. It wasn’t until he joined this industry that Lateur realized he can make a living doing what he loves.

“It was a huge light bulb moment,” he says. “I was not comfortable in my own skin. I knew I liked a few things. I liked people and making sure people are taken care of. But I never had a specific drive to do a certain thing until my mid-30s, when I discovered there is a way to funnel my energy and make a living from it.”

In this industry, Lateur says you’re not just selling a product. “It’s almost not about the product sometimes. The way people view a brand or a logo is all emotional. A powerbank or Bluetooth speaker isn’t the game-changer. It’s more about your relationship between the consumer and what that brand means,” he says. “As far as selling promo products, you have to build a relationship and get to know who that brand is, almost like it’s a person, so you can solve the marketing problems they might have.”

Promo is more about emotions and relationships than about physical goods, Lateur says. “Selling the same product will be different each time. It can be the same product, but it can serve so many purposes.”

Lateur gives back to the industry through volunteering with the Promotional Products Education Foundation (PPEF), which provides college scholarships to promotional products industry employees and their children. This year he’s hosting the foundation’s first live concert series. The first event, held in June, raised more than $5,800. The next virtual concert, featuring performers from within the industry, will be on Thursday, November 10.

“I think what PPEF does is show young kids that people care,” Lateur says. “It’s not only about giving money, but it’s also about setting an example as a group that we can come together to help make your life better.”

When Lateur was 19 and in college, he decided to leave his parents’ home and pursue his education in another state, supporting himself fully. “I had no money. I was completely on my own to take the next step in my life. I just did it. I didn’t have a plan, but I knew I had to escape the idea of safety to grow and find myself as a person.”

He struggled for a while. “I got a job, and I was able to pay rent. But there was no room for personal growth, which is kind of important. That’s another reason why PPEF is important and scholarships are important. Paying for an education means the money has to come from somewhere.”

Lateur interacts with the industry in other ways, like transforming into his alter ego, Nicky Wonka. With HPG’s candy brand SugarSpot, Lateur has found his own sweet spot, combining his larger-than-life personality with his love of candy. Nicky Wonka has made an appearance at a few industry shows, handing out treats. Lateur says, “If he’s not bingeing on candy in a back alley somewhere, he’s usually plotting his next appearance. There’s a good chance that Nicky Wonka will be found running around the show floor at The PPAI Expo.”

While Lateur exercises his creativity constantly, his biggest source of inspiration is his 11-year-old daughter, Lily. “Taking her to school and watching her grow reminds me that there is always something new to learn,” he says. “I think life is kind of like school. She inspires me to think about how things can be done in a different way.”

PPAI Media spoke with Lateur to hear how he hopes to see the industry grow.

The promotional products industry can better market itself by… educating the public. Promotion is in our name, so you’d think it’d be natural for us to market ourselves. We are the foundation for modern marketing. Signage and merch is everywhere. If we are a farm, we are the people planting seeds and cultivating the plants. The public is eating the fruit of this labor. Whether it’s a supplier coming up with new products or a distributor figuring out how to harvest it, we are really important. People forget where their “food” comes from. Showing how marketing and advertising are born is a good start.

In the next few years, I hope to see the industry evolve by… improving systems so we can focus on the creativity of people. PPAI recently elected two new board members and [PPAI President and CEO] Dale Denham has spoken about this, too. It can sometimes take seven touches from a purchase order to a product getting out the door of a factory – seven different people doing seven different things. If we can make workflow better, people can focus on more creative endeavors to make the industry better. I think that will streamline our industry. It won’t remove the need for people, ever. But those people will get sharper, and they’ll be able to use that energy they spend on emails in other ways to grow our industry. 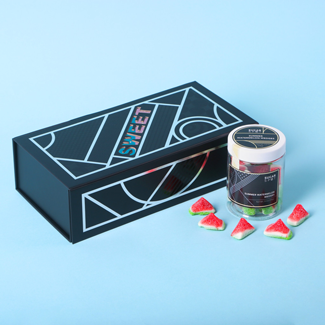 “Candy is the short answer,” says Nicky Wonka, Lateur’s alter ego. “We have this semi-custom gift box at SugarSpot. I like it for many reasons, but inside, there’s deco on the back when you remove the candy jars. There might even be a golden ticket campaign coming in Q1 next year. So, if you get one of the boxes, you might see Nicky Wonka’s face peeking from behind the jars. We can make this box a really fun and memorable experience.”
HPG / PPAI 110772, S11 / www.hpgbrands.com