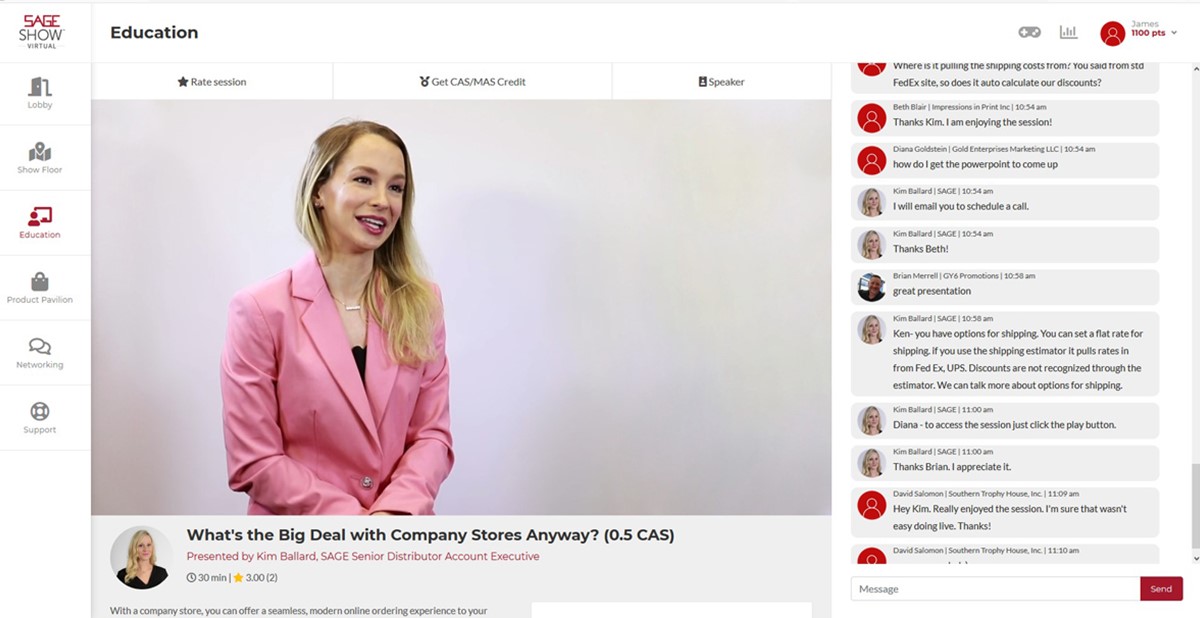 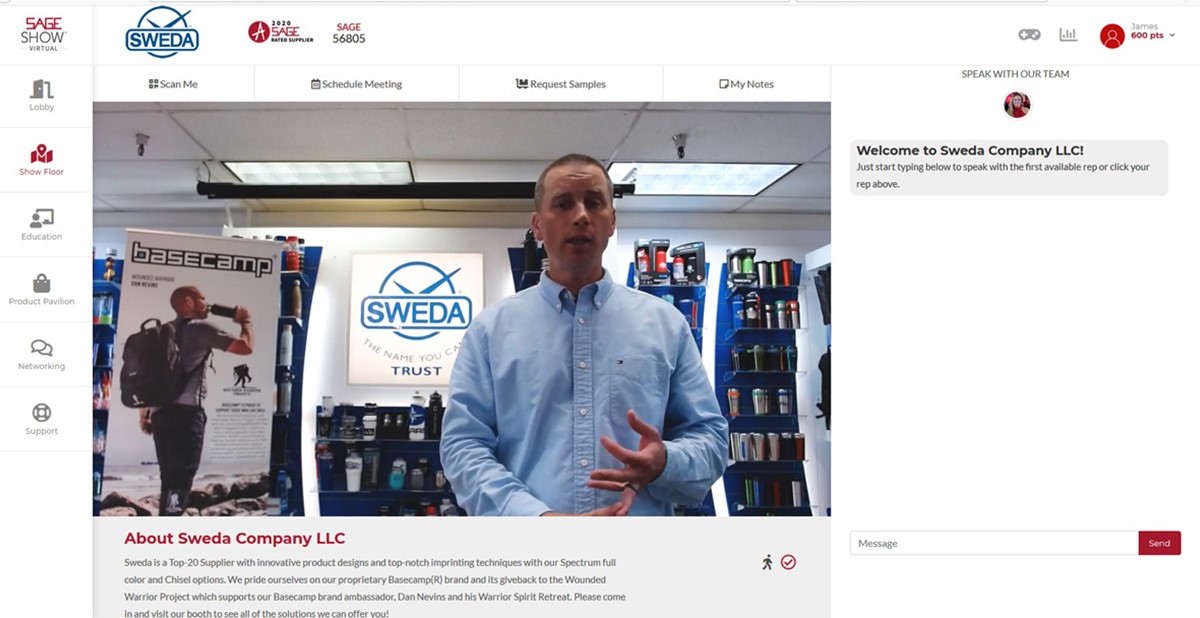 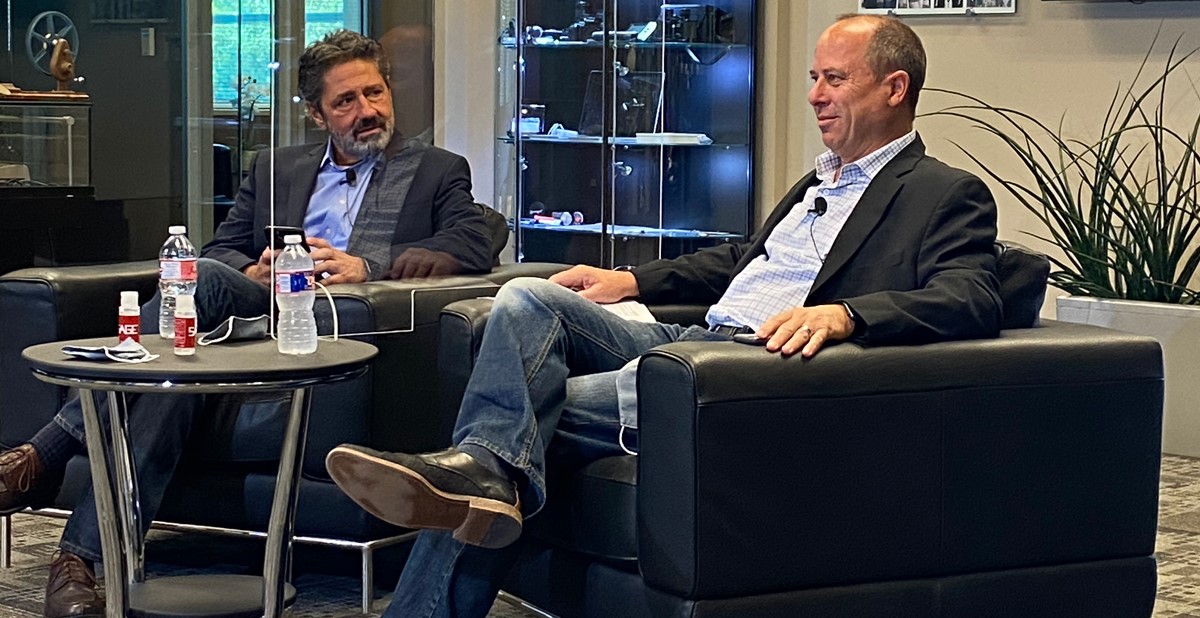 This year, when it wasn’t possible to deliver the annual in-person trade show in Irving, Texas, SAGE produced its first virtual show on August 18 showcasing more than 200 exhibiting companies along with 14 pre-recorded education sessions produced by SAGE and PPAI. The show drew more than 4,000 attendees—the industry’s largest online event ever, according to SAGE.

The full-day event opened at 9:15 am with a live general session hosted by SAGE President David Natinsky, MAS, and PPAI President and CEO Paul Bellantone, CAE. Speaking by video from SAGE offices in Addison, Texas, for 45-minutes the pair exchanged views on how their organizations have navigated through the pandemic, the ways they are responding to meet members’ needs and their thoughts on what the future holds, and then they took a number of questions from show attendees via an online chat tool.

SAGE Show Virtual was free and open to all distributors offering them a chance to view videos in each exhibitor’s booth, see featured products and chat in real time. However, as the show attendance ramped up by noon, the sheer number of participants proved overwhelming for the platform and some attendees and exhibitors experienced technical difficulties.

In a statement released on Wednesday, Natinsky addressed the problems. “We want to take this opportunity to apologize for any technical issues you may have experienced during the show. While we planned for very high attendance based on the registration numbers, the popularity of the show and the extreme level of engagement exceeded even our own expectations. As this was the first time using this platform and the first of its kind in our industry, we learned a lot. We will be using everything we learned to continue to build on the platform as we move forward. The good news is that we have already put together a solid plan to move forward. Most of you know that we at SAGE have very high standards for ourselves. While we're disappointed that we didn't meet those standards this time, this only drives us to make sure we do better next time.”

To make up for the lost connectivity time and recognizing that many distributors needed more than six hours to get through the show, SAGE has announced two additional days of the show on September 22 and 23, 2020. Exhibitors will be included at no additional cost and they have been contacted; distributors can register to attend at www.sageshow.com.

“We want to again assure you that we are already in the process of taking the necessary steps to be sure we can accommodate substantial traffic,” Natinsky said.

Overall, reaction to the show was positive. John Short, national sales manager of exhibitor WOWLine, says, “I thought the concept was great, but yes, there were problems especially in the Chat function. It reminded me of shipping online on Black Friday and a retailer’s web site crashes because there is so much traffic."

Josh Goodelman, vice president of exhibitor Liqui-Mark Corporation, says, “I am a supplier and I was and still am very impressed with the platform SAGE created. Yes, they admit it wasn’t a successful launch and we, too, experienced problems. However, I have faith they will resolve it.”

Distributor attendee Andrea Winans, brand manager of Proforma Angelini & Associates, commended SAGE for trying something new. “I thought the SAGE Show was great! It’s the first attempt to be able to bring a show to us. I’m glad they took the time, trouble and expense to do this for us distributors—and for free.”

filed under August 2020 | SAGE Show Virtual
Read time:
words
Comments (1)
Cindy Powell
The virtual SAGE show was great. I too had lots of problems early on with slow chat or crashing or slow moving around. I got out of the system a couple of times and waited an hour each time before getting back in. When in I had some great interaction with vendors and made contact with a new label vendor. I commend SAGE for the hard work it took to put this together and especially the technical issues. That is no small feat....especially after seeing 4000 people on the system. Great job. Loved touring the booths without having to put 20 miles a day on my feet!
Leave a reply