When Kim Bakalyar was a young girl, she dreamed of becoming an actress—maybe one day winning a daytime Emmy award for her role on a hit soap opera.

“But this is so much better,” said Bakalyar, CAS, in accepting this year’s PPAI Woman of Achievement Award at a Sunday night celebration and dinner. The festivities kicked off PPAI’s 2022 Women’s Leadership Conference in Charlotte, North Carolina.

The chief compliance officer at Los Angeles-based distributor PromoShop, Bakalyar began her career in the promotional products industry at a company called Idea Man in 1980. “I am truly honored…. I am humbled to stand in the company of the other outstanding women who have earned this award. Your stories have touched me and inspired me.”

The acting career didn’t work out for Bakalyar, and the promotional products industry is better off for it, according to numerous women she has mentored and worked alongside. Before delivering remarks, she was introduced by PromoShop COO Kate Alvarez, who has known Bakalyar as a family friend since she was a kindergartner. Alvarez was later referred to PromoShop by Bakalyar. 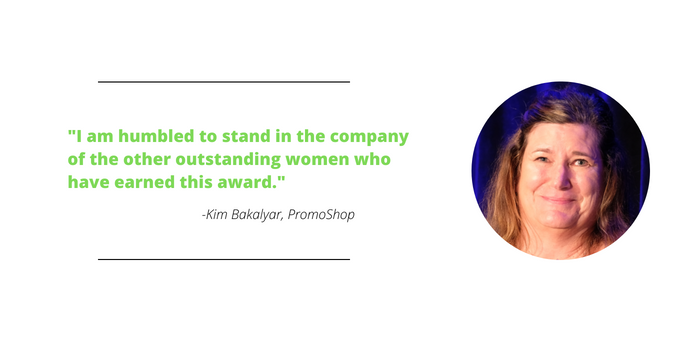 “Kim is an undying advocate for women,” Alvarez said. “When you’re in a meeting or a Zoom room with her, you’re guaranteed to hear her speak up on behalf of another woman on your team. She advocates for others using her influence and an incredible network of friends and contacts to generate opportunities for the women around her.”

Since joining PromoShop in 2004, Bakalyar worked to develop a robust import and export division, built out the company’s product compliance program, educated others on the details of supply chain challenges and cultivated relationships with PromoShop’s supplier network. Bakalyar has served on regional association boards, contributed to nonprofit causes and volunteered for PPAI, all while raising two girls of her own, volunteering outside of the industry and beating breast cancer.

“Just wow,” Bakalyar said, clearly moved after she received a standing ovation from the audience of leading industry women.

True to form, according to those who know her, Bakalyar made space for another woman even as she received her honor for the night. Because WLC was held virtually in 2021, last year’s Woman of Achievement, Mary Jo Tomasini, MAS+, did not have the opportunity to accept her award in person. Prior to Bakalyar’s moment, Tomasini delivered her own speech, offering her gratitude to Bakalyar for the opportunity to share the night, as well as to the industry as a whole.

“Our industry is flush with smart, genuine, generous, caring, courageous and downright great women who know how to maneuver and win, especially when they lean on each other,” said Tomasini, the CEO and founder of distributor Competitive Edge, based in Michigan. “It’s not the pens or polos, it’s the community, and in particular the women in our community, that make this career so rewarding.” 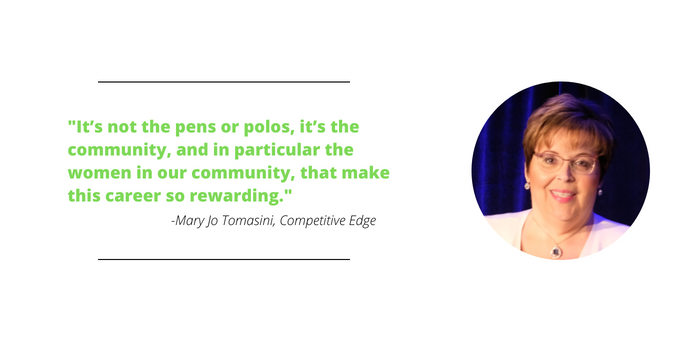 Bakalyar said she was honored to have shared the stage with Tomasini at the first in-person WLC since 2019. Originally scheduled to take place in Charlotte in 2020, that year’s event was cancelled amid the pandemic. “I am so glad that you were able to be here—that we are all able to be here in person today,” Bakalyar said. “Last year on Zoom was as good as it could be at the time, but this is the way it is.”

Set to retire on July 1, Bakalyar was reflective of the change in the industry since she began her career in promotional products as an office manager, noting the evolution from four-week lead times to 24-hour turnarounds, from working via mail, to fax machines, to email. “I never thought, when I walked into Idea Man in 1980, I would be standing here today,” she said. “There have been so many changes and so many lessons learned along the way.”

Bakalyar shared a number of those lessons on Sunday night, but the first that she mentioned traced back to ninth grade, when she received a lower grade on an assignment than a boy who turned in virtually the same work. Her teacher told her that the output was the best the boy could have done, but that Bakalyar was capable of more.

The takeaway has stuck with her ever since, shaping her approach to a 42-year career and the relationships she’s forged with an untold number of industry women: