PPEF Is Movin’ and Groovin’ 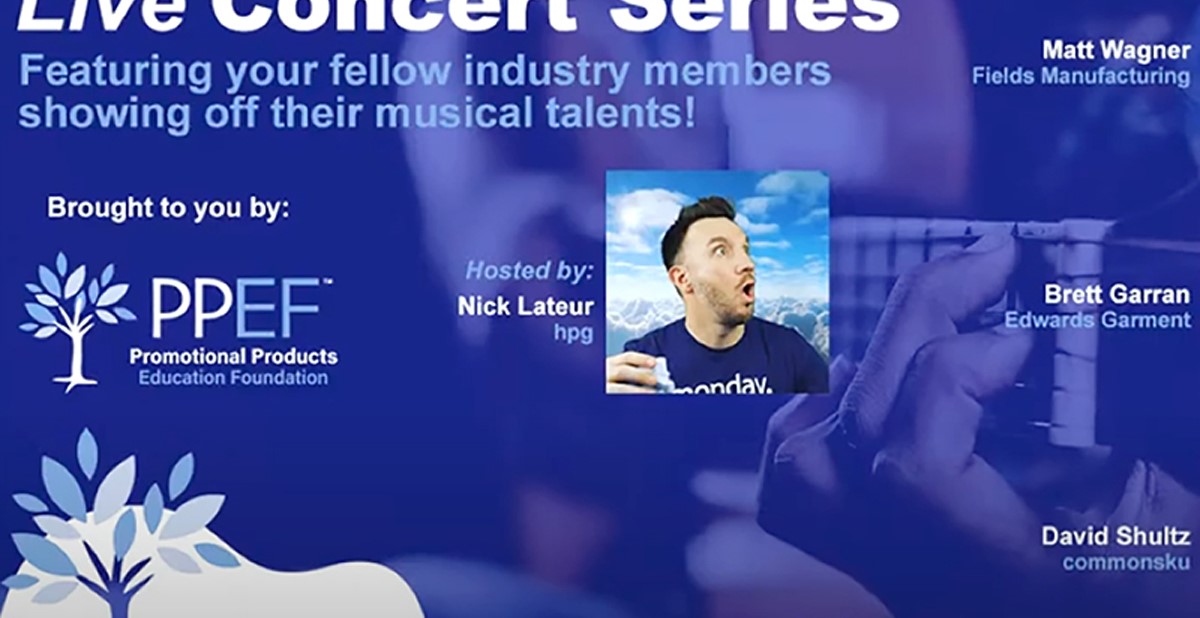 (Editor's Note: The second of PPEF's Live Concert Series events, originally scheduled for September 7, has been rescheduled to November 10 at 4:45 p.m. ET.)

The Promotional Products Education Foundation (PPEF) is inviting industry professionals to groove to a new beat this year with the launch of its Live Concert Series. A virtual experience drummed up by industry veteran Roni Wright, MAS, of supplier The Book Company, attendees will rock out while learning about PPEF and how they, too, can get involved.

The Live Concert Series, which kicked off with its first livestreamed event on June 8, raised more than $5,800 for the (c)(3) nonprofit, which grants education scholarships to accredited universities, community colleges, trade schools and career colleges to the children of industry professionals. As PPEF’s first major fundraiser since the pandemic, the series was created to collect donations to fulfill the organization’s mission, but also to educate industry professionals of the eligibility requirements for their children for a PPEF Scholarship, and to inform interested companies about the options for giving.

“Yes, we want to raise money for the foundation, but we also want to raise awareness and create an experience by which all of our industry can participate,” says Wright, who also sits on the PPEF Board of Trustees and is chair of its fundraising committee.

Sydra Newell of supplier SnugZ USA is another member of the PPEF Board of Trustees and is chair of its marketing/recognition committee. She says, “In addition to bringing awareness, the concert series also brings industry veterans closer together, especially for those who do not normally travel within their profession.”

The idea for the concert series came to Wright when she was reflecting on a pre-pandemic experience. “Before Covid, I was living in this little city and I learned about a program called The Listening Room, where someone in a home setting would have a noteworthy musician come in and invite people who are part of their network, to come to a concert in their home and give a donation that goes 100% to the artist,” Wright says. “I thought, ‘Wow,’ is there a way that I can transpose that idea into an online event, have an industry concert where we have musicians who are in our industry and extremely talented?”

The first concert was broadcast on YouTube and Facebook. Three industry musicians showed off their talent for a good cause, which included Matt Wagner of Fields Manufacturing, Brett Garran of Edwards Garment and David Schultz of commonsku. Nick Lateur of HPG emceed the event, and the Braintree, Massachusetts-headquartered, supplier donated the hosting platform. T-shirts were also donated that featured a relevant graphic and were given to those who gave $100 or more to PPEF.

“We’re very excited that we can support students; the children of our industry people,” says Wright. “Anybody who has children in college or will be attending college is eligible to apply for this scholarship. It doesn’t matter if you work in the warehouse or work at home, if you’re full-time in the promotional products industry and you work for a company in our industry, your children can apply for scholarships.”

New to this year, Wright says PPEF is expanding its scholarship eligibility to include accredited trade schools. “We feel there are students who want to pursue a trade, and why shouldn’t we support their endeavor?” she says. And to get the word out there even more, PPEF has issued flyers in English, French and Spanish, so a more diverse group of employees can both spread the message and consider the opportunity for their children. In the future, PPEF aspires to open a Live Concert merchandise store, Wright says, and to invite former scholarship recipients to share their stories on-camera with concertgoers.

The other side of the Live Concert Series entails charitable giving from interested donors, and Wright says that PPEF is working hard to connect with prospective companies to encourage their involvement and explain their options. She’s particularly dedicated to reigniting the Tomorrow Fund, which commits donors to one of six giving tiers under a six-year term and makes it possible for PPEF to ensure future scholarships. Wright also notes the other giving options, which include the Named Scholarships, where companies can recognize their standout employees or create a long-lasting legacy in memory of an industry icon.

“PPEF makes a positive impact by bringing people together,” says Newell. “This platform also helps elevate talented musicians within our industry all in the name of creating a better future for our children. PPEF exemplifies what makes this industry so special.”

Register for the next concert here: www.ppef.us/live/.

For more on how to participate as musical talent, contact Nick Lateur at nick.lateur@hpgbrands.com.

Renda is a New York Metropolitan-area freelance writer and a former associate editor at PPAI.