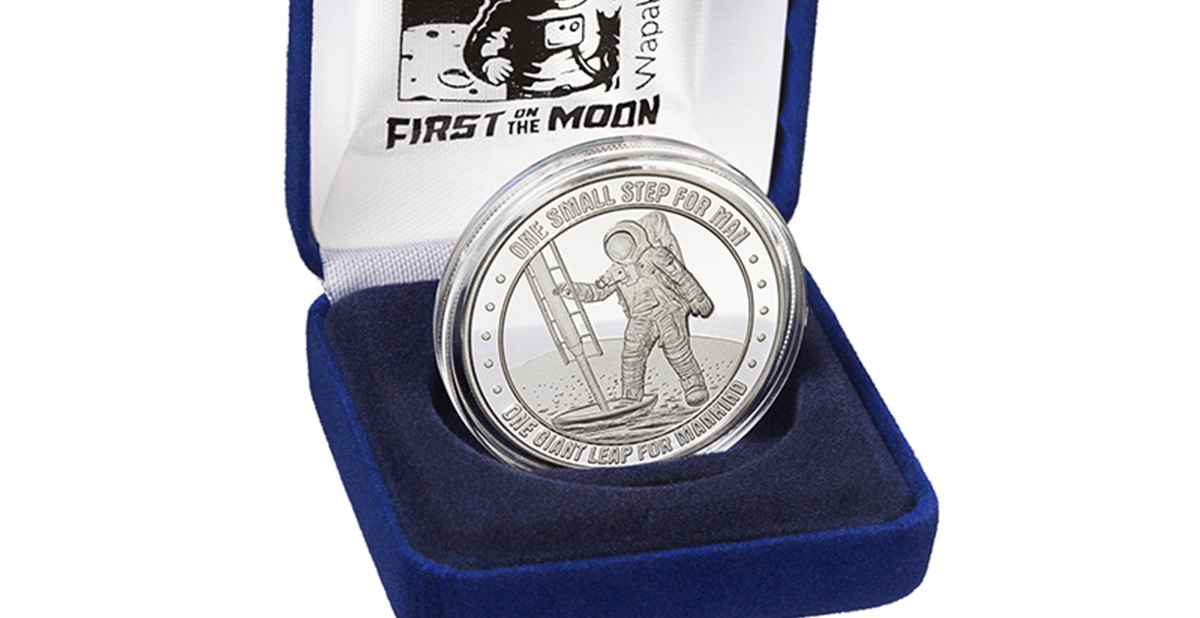 Above photo: Commemorated to recognize the 50th anniversary of the Apollo 11 Mission, this one-ounce, fine silver coin features Neil Armstrong stepping onto the moon, and the reverse image shows the Armstrong Air & Space Museum in Wapakoneta, Ohio. Five-hundred of the limited-edition coins were made.

President Abraham Lincoln is arguably one of America’s most recognized and well-known presidents. This isn’t only because of his steadfast leadership during the Civil War and his progressive movement to emancipate slaves, or even that he was the tallest president to date, standing at six-foot-four inches; it’s because of his beard. Lincoln, who was also the first bearded president, had a distinct appearance that distinguished him from the other 44 presidents. But believe it or not, there was a time when Lincoln was wishy-washy about keeping his signature beard—and it was Osborne Coinage Company, then Z. Bisbee Co., that helped him decide.

Osborne Coinage Co., founded in 1835, is America’s oldest private mint. The Cincinnati, Ohio-based supplier produces as many as 600 million custom coins annually for a near-endless list of campaigns, events and milestones, from anniversary coins to Mardi Gras doubloons, gifts and awards, recognition and gift certificates, to building dedications, business “cards,” sobriety coins and, of course, promotional coins. Back in the company’s early days, President Lincoln distributed coins from Osborne Coinage when he ran for president in 1860 and for reelection in 1864—and after seeing his likeness printed on a sample coin, he opted for the beard. “He couldn’t decide how he was going to run, with or without the beard, so he had us make two sets of coin dies (the design to be imprinted on the coins) showing him each way,” says Gibson Olpp, marketing manager at Osborne Coinage. “He decided, after seeing the dies, to run with the beard.” Both sets of Lincoln’s dies remain in the company’s die vault today, along with dies from eight other presidential candidates, including Ulysses S. Grant and Franklin D. Roosevelt.

Osborne Coinage also played a major role in World War II. The company made five billion red and blue food ration tokens, in just five months, that were distributed by the government. “Ration tokens were issued to each American family, dictating how much gasoline, sugar, meat and other items any one person could buy,” says Olpp. Using fiber tokens, the country was able to salvage every last bit of metal for the war effort, and throughout, Osborne Coinage’s nearly 1,300 employees worked round-the-clock to churn out as many as 80 million tokens each day.

Decades later, Osborne Coinage became a well-known player in the casino industry, and was sought out by casinos as far away as Argentina and Greece to be their go-to-source for tokens or “chips.” The success was sparked by the legalization of riverboat casinos along the Mississippi River and its tributaries, Illinois, Louisiana, Mississippi, Missouri and Indiana. Osborne Coinage partnered with IDX Inc., a technology company, to develop the X-Mark Optical Security System, which eliminated counterfeiting by requiring each casino to have its own branded coins that couldn’t be used or played elsewhere. Through this effort, Osborne Coinage produced 250 million chips, which were distributed worldwide. The company has also found a way to evolve after the transition of casino chips to virtual currency, minting “Bitcoins” for various customers. Now, Osborne Coinage offers token destruction services to its casino clients, where they send mobile rigs out to the casinos to destroy the tokens and transport the leftover metal to facilities to be recycled. 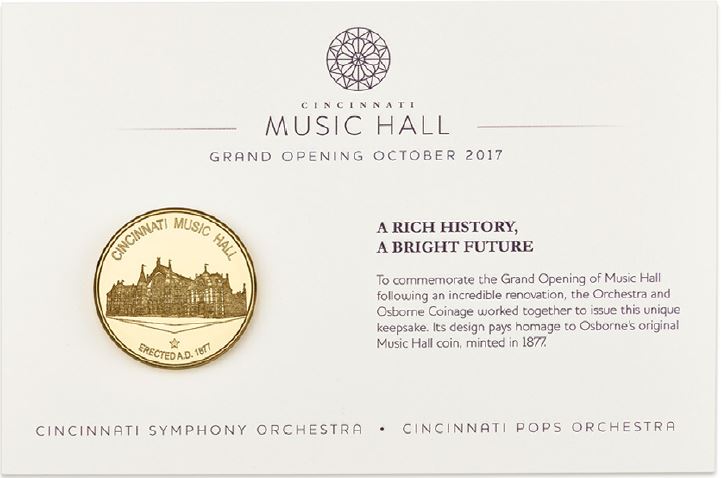 In a more recent campaign, Osborne Coinage partnered with McDonald’s in 2018 to celebrate the 50th anniversary of its iconic Big Mac. The intent was to build buzz around the milestone, as the Big Mac had lost some of its relevancy over the years. To do so, Osborne Coinage created 6.2 million MacCoins, which were distributed to McDonald’s locations in more than 50 countries, and could be collected, shared or redeemed for a complimentary Big Mac. The campaign delivered and turned into more media opportunities—and more than three billion impressions—such as a professional sports game kicked off in Argentina by flipping a MacCoin, and a press conference held in China to unveil the new “currency.”

Osborne Coinage’s interest in recycling and reusing continues through its operations today. The company is housed in a 60,000-square-foot, self-contained facility, where it has been since the ’50s, and where all the engraving, die production and tool-making is done. Adding even more charm to its history, part of the facility is also an old tenement house. “On the third and fourth floors there are old washing machines and cast-iron claw-foot bathtubs,” says Olpp. All the electricity consumed by Osborne Coinage is 100-percent from renewable sources; 30 percent of it is generated from two rooftop solar panel arrays. The company creates its coin blanks using metal coils purchased from U.S. mills, and all of the leftover scrap metal—which includes aluminum, copper, brass, nickel, silver and fine silver—is also recycled and returned to the mills, where they are re-rolled and re-used.

Tell us about the history of Osborne Coinage Co. and how the company got its start.

Olpp   As America’s oldest private mint, Osborne Coinage traces its roots back to 1835 when Andrew Jackson was our president and there was no such thing as a legal tender banknote. Indeed, there was no federally-backed paper money until 1862. During that period, there was a critical lack of coinage as what the government minted from 1836 to 1846 consisted entirely of proof coins for collectors. The lack of faith in privately-issued paper banknotes created an opportunity for the production of more secure metal coins. The Cincinnati-based company that would become Osborne Coinage started producing gold and brass coins early on, adding lightweight and modern aluminum to its catalog in 1892. 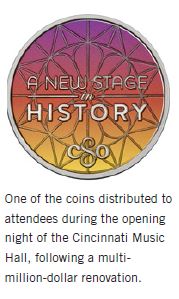 What do you think makes Osborne Coinage’s coins timeless for recipients?

Olpp   Coins were originally produced in seventh century B.C. and have been captivating collectors ever since. The coins we manufacture look like money, so they’re seldom thrown away. Some people believe there’s no place for something as low tech or old fashioned as coins in our 24/7 wired world. We believe that when everything is in the cloud, having something to hold in your hands is just satisfying on a basic level. Coins are tangible; you can touch them, smell them and even taste them, if you’d like, because our coins are 100-percent lead-free. Finding a coin is like a snapshot in time or opening up a time capsule and being surprised at what people were celebrating, commemorating or mentioning.

What are some other ways, throughout history, that Osborne Coinage coins have been used?

Olpp   In the early 1900s, coal mines and lumber mills came to Osborne Coinage to purchase scrip, which was a form of currency used to pay employees that was accepted at company stores. Known as ORCO Scrip, the counterfeit-resistant coins were specific to a certain coal mine or mill and did not have value anywhere else. Since 1990, Osborne has supplied about 14 million train, trolley and bus tokens to the Southeastern Pennsylvania Transportation Authority, along with more than 100 million transit tokens for New York City’s public transportation system. More than 17 million promotional coins were distributed in General Mills cereal boxes to promote the 1996 Olympic Games, and we’ve created collectible coins for Star Wars action figures.

What are some of the more recent projects, programs, commemoratives and campaigns that Osborne Coinage has been involved in?

Olpp    We commemorated the 50th anniversary of the moon landing in July with 500 limited-edition fine silver coins for the Armstrong Space Museum. These coins were packaged in a blue, velour case with the 50th anniversary logo printed on the lid’s interior. We’ve created challenge coins for veterans to receive through Honor Flight, a nonprofit that flies veterans to Washington, D.C. to visit the memorials at no cost. After the completion of the $143-million-dollar renovation of the Cincinnati Music Hall, a national historic landmark, a multi-tiered, coin-based program was used to acknowledge donors, patrons and visitors. High-end donors received fine silver coins in walnut boxes, opening-night attendees received memento cards with affixed coins, lower-tier donors received golden brass coins in blue velour boxes with an imprinted puff showing the sponsor, and attendees received colored point-of-purchase coins. For another unique campaign, we created a series of colored coins to mark the different voyages taken by Jefferson’s Ocean Whiskey. Jefferson’s puts individual casks of whiskey on ships and sails them around the world to age. The motion of the ship and the path it takes influence the taste of the whiskey. The coins commemorate and notate the voyage number. 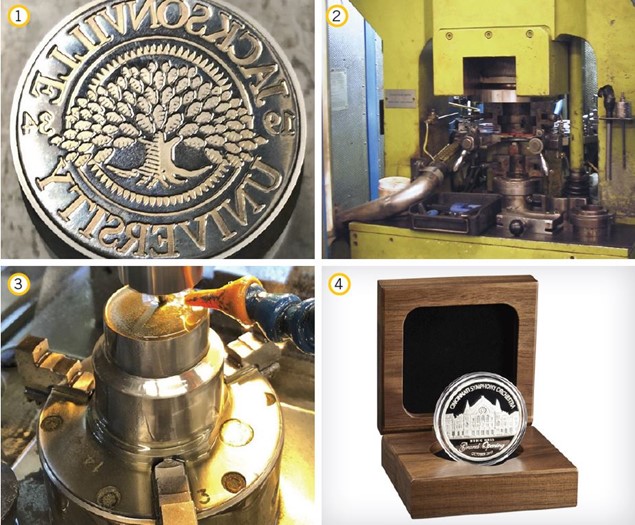 During the first phase, vector artwork is produced and a black-and-white layout is sent to the customer for approval. The customer also selects the desired metal to be used, along with the use of color printing on the coins.

The images are reverse-cut into die blocks. Two dies are needed to make a coin—a die for the front face and a die for the back face.

Both dies are placed into a press—one on the top and one on the bottom.

A blank metal disc is inserted between the dies and more than 150 tons of pressure is exerted on a high-speed press to transfer the reverse-image that was cut into the dies onto the coin blank. When complete, the coin is now completed reversed and readable.

The completed product is custom packaged, with options including a deluxe velour jewelry box, a clear capsule, a velour drawstring pouch, an easel, a wooden box with a solid or glass lid, a polybag or custom coin cards.