Helping In A Big Way

Photo above: In the past 10 years, Rod Brown, CAS, has made five trips to Malawi, Africa, bringing hats, t-shirts, soccer balls, pens and hope to the people there.

If you happen to journey to Malawi, Africa, you may just stumble across a MadeToOrder pen or two. In the landlocked, southeast African country—which is one of the least developed nations in the world and home to one of the highest HIV rates globally—a ballpoint pen is a rarity; a treasured gift. In the promotional world, ballpoint pens fill the need of brand recognition and recall, but in Malawi, they are not looked at as commerce, but as a luxury. In the country’s rudimentary schoolhouses, orphanages and even hospitals, as rare as pens are, there’s seldom even paper to write on.

Rod Brown, CAS, the founder and retired chief financial officer of distributor MadeToOrder—and the recipient of PPAI’s 2020 H. Ted Olsen Humanitarian Award—has made the 10,197-mile trip from his  headquarters in Pleasanton, California, to Malawi five times in 10 years. And each time he goes, be brings a few heaping handfuls of MadeToOrder-branded pens, along with 200 pounds of luggage, packed to the brim with donated, branded soccer balls that he deflates to pack, along with hats, t-shirts and other goods donated from SanMar, BamBams, Hit Promotional Products, PowerStick and other suppliers. And on every trip, he leaves nearly everything behind, including the luggage itself and his own clothes, with the Malawians. After his most recent trip, Brown returned with nothing but his backpack, shaving kit and the clothes he was wearing. “It has to do with being a human being,” he says. “When you get back to the basics, it’s all about helping your neighbor.” 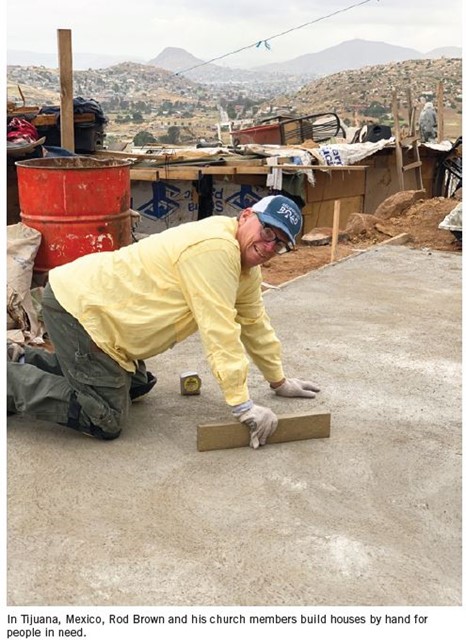 Brown has been in the promotional products industry for 40 years, most recently as CFO and managing director of MadeToOrder, a position he’s held since 2003. It’s a company he’s been nurturing for some time, having founded MadeToOrder as the Harwood Company in 1989. He grew it for 10 years, sold it in 2000, and then organized a buyback in 2003. But in his latter years in promo, Brown has been nurturing charity work, too.

He first dipped his toes into the waters of overseas volunteering some 15 years ago, when his youngest son, then in high school, registered for a home-building trip to Tijuana, Mexico, over spring break. Simply looking to spend more time with his son, Brown accompanied him on the trip, which was organized through their church, Piedmont Community Church in Piedmont, California. “My son wanted to go with a group of friends in town, and I always wanted to be involved with my sons in just about any way I could,” he says. “I did not know what to expect.”

What started as a single trip gave way to more. Brown has since traveled to Tijuana more than 10 times, along with some 45 adults and 240 high school students, to build homes for the families there. In Tijuana, he says, there aren’t just a few shanty homes, here and there, that could use some TLC. Rather, there are tens of thousands of “homes” haphazardly made from large sheets of scrap metal and discarded garage doors. The latter, Brown says, are one of the materials most sought-after by the impoverished in Tijuana, and are mainly imported from the U.S.

Brown now helps facilitate the trip through his church, guiding the high schoolers through a change in perspective and worldview. The students are assigned to teams of 12, which are distinguished by colors (i.e., the tie-dye team, the turquoise team, etc.), and they are purposely grouped with students they don’t know well. Over five full days, these students bond while working in close quarters, helping to build the 11-foot-by-22-foot homes, reminiscent of large sheds, that will shelter 10 or more family members. The homes are without electricity or plumbing, but they are rat-proof, dry and provide the children living there with a stable address, so they can attend school. The homes are also built exclusively by hand, without the use of power tools—a decision made to teach the students basic carpentry and allow the families to make continual improvements to their homes. In 2019, Brown, his church and the high schoolers built 20 homes.

“We, in our community, hope that just a small part of this experience will help mold and guide [the students] in a micro amount,” he says. “If you’re sending a man to the moon and you’re off one degree on your course, you can miss that moon by hundreds or thousands of miles. Over a 50-to-60-year adult lifespan, if I can contribute a course-correction to goodness, light, sharing and humanity, at some microscopic level, it becomes amplified over their lifetimes and can really change [the students'] lives. To me, that’s a tremendous opportunity.”

After five or six trips to Mexico, Brown’s church partnered with the international Presbyterian Church to find a sister church—a church for Piedmont to connect with and provide support and resources. Piedmont was connected with Kafita CCAP in Lilongwe, Malawi, and soon thereafter, Brown learned of the Nkhoma Mission Hospital and the Embangweni Mission Hospital, and met Dr. Martha Sommers, a Midwesterner who has since retired, but spent 20 years as a missionary in Malawi. Many of those years, Dr. Sommers worked at Embangweni, where she was the only doctor for some 1,000 square kilometers, and where the patient-to-doctor ratio was a staggering 55,000 to one. Due to the lack of available health care and the high HIV rate—which peaked in 1993 at nearly 30 percent of the population, but remains in the double digits—there is a severe deficiency of clean blood. So when Dr. Sommers first approached Brown, saying, “If you give me a pint, I will save a life!” he quickly obliged. “How do you say ‘no’ to that request?” he says. Now, he donates blood during every visit. 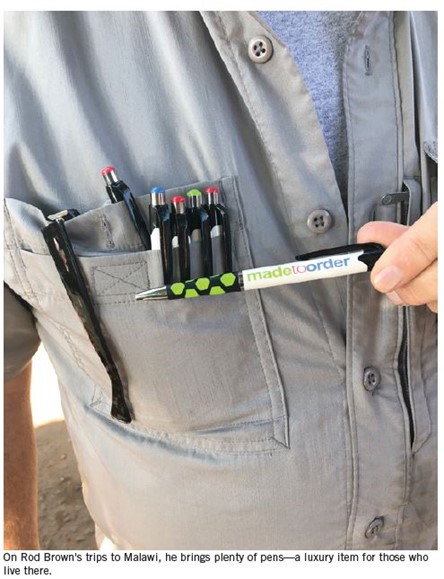 And even here, there was room for promotional products to make a difference. When Brown was asked to complete paperwork prior to donating blood, he was handed a “pen” he described as “completely broken”—only half the plastic remained, the cartridge was protruding from the barrel, and it had to be held very carefully to fill out the form. You can bet that Brown left behind a handful of pens for the health-care facility. “I’m the pen guy,” he says. “Everywhere I went, I was giving out pens to people.” In addition to 200 pens, several other suppliers donated products for Brown to bring, including four Ohio Roller Bags and 80 long-sleeve, lightweight, colored t-shirts from SanMar, 80 soccer balls from BamBams, 100 sunglasses from Hit Promotional Products and 25 solar-powered battery power banks from PowerStick. MadeToOrder also donated three laptops and 100 hats, and Brown personally purchased a camera for the senior reverend in Malawi, so he can send along photos from time to time, in addition to one ream of braille paper and 200 Tootsie Roll lollipops.

Another trip or two to Malawi brought Brown to his current focus, which is helping the orphans attending the Chilanga School for the Blind. “It was here where I was most overwhelmed,” he says. The school, which was founded in 1952, serves 50 to 70 children; most are orphaned and all have vision impairments. The children there have undergone many hardships due to their condition, and although not all are technically “orphans,” they were cast out of their villages and abandoned in fear of their blindness being contagious. Because the gene for blindness is so closely connected to the gene for albinism—a genetic condition where the body is unable to produce the normal amount of melanin, causing a lack of pigment in the eyes, skin and hair color—about 15-20 percent of the children in the orphanage are albino. But being albino doesn’t only make the children vulnerable to the sun; it poses a serious and grave safety concern. In this region of Africa, there remains an old “witch doctor” mentality that grinding the bones or drinking the blood of an albino can bring wealth, luck, prosperity or special powers. Tragically, after being cast out of their villages, many of these children are hunted, kidnapped and sold on the black market. Brown is actively trying to improve the conditions, lives and experiences of these children.

Brown recalls an experience he’s witnessed time and time again, that’s stuck with him about the power of bringing promo products to the Malawian people. The children are fed at feeding stations, which is basically a big dirt field at a hospital or church, headed by volunteers, who cook nsima, a cornmeal porridge, in a giant pot over a simple fire for hours. Each plate of nsima is shared by five or six children. During mealtimes, Brown has thrown out three or four soccer balls for some 100 children to play with, and watched it add joy to their day. “A soccer ball needs no explanation, no story. You just blow it up, and kick it on the field, and everyone starts smiling and running around—and they had a good day.”

Brown is currently planning his sixth trip to Malawi in June 2021, with hopes to bring along industry friends for the ride, and his 12th and 13th trips to Mexico in April 2020 and April 2021. He is looking to invite a company or executives who are interested in extreme team-building and giveback, and is welcoming industry professionals who are interested to contact him directly. He’s also looking to create, curate and host annual trips to Mexico as a “team-building event on steroids for a company that wants to do something really unusual.” It’s a plan, he says, that fits in with the triple-bottom line—people, planet and profit—and one that profoundly changed his life. 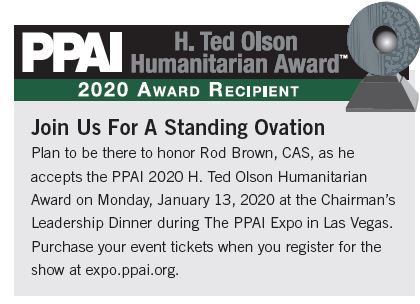 “Life is more than just commerce, and I had to get to be older to realize that life is an incredible gift—and I love commerce. I love being an entrepreneur—40 years of promotional products—but it’s more than commerce and it’s more than accumulating stuff. We have to connect with the human condition,” he says. “To be a blind, albino orphan in sub-equatorial Africa, or to be a rural, poverty-stricken, multi-generational family of 11 in central Mexico who weep when we build the 11-foot-by-22-foot powerless shed because it’s better than the makeshift tarp and tires they sleep in—this helps me to shut up and thank God for my wife and my life.”

Donations can be made to the Chilanga School for the Blind in Malawi, Africa, by visiting the GoFundMe page created by Brown: https://www.gofundme.com/f/Orphaned-and-Blind-in-Malawai. The link includes a video about the school, the children being helped and more about Brown’s mission for the upcoming Malawi trip.

filed under Profile | December 2019 | Rod Brown | MadeToOrder | Volunteering | Malawi | Tijuana | Chilanga School for the Blind | Philanthropy
Read time:
words
Comments (2)
Rod
I logged in to my email this morning to see a number of very notes from my peers in the Promotional Products Industry and realized something must have been published. Thank you PPAI and in particular Danielle, for writing such a kind and flattering story. Thank you for sharing the stories of these children and families.
Brian Scott
Rod the world needs more people like you!
Leave a reply